Reminiscence of a Graduate from 1889 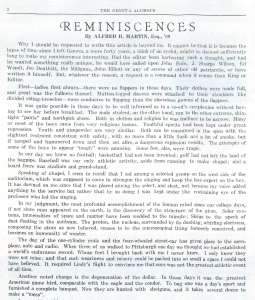 Article from Alumni on the changes Geneva has undergone 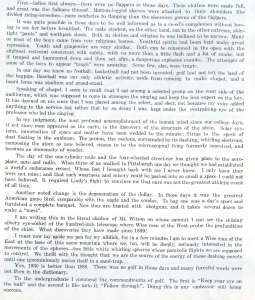 End of an article from Alumni on the way Geneva has changed.

This last piece is one of the strongest in showing the image Geneva wanted to portray in one article. The earlier reminiscences article from one of the first female students was close but this hit the nail on the head as far as Geneva was concerned. Its written by a lawyer who graduated in 1889. He writes about the differences between his Geneva and the Geneva of the 1920s. It is actually fairly hilarious. He compares the flappers to the ridiculous clothing that his fellow male students wore, pencil thin pants and shoes. He makes fun of his fellow students and saying that they had no sport beyond baseball and running to chapel. The author writes almost poetically about that changes that have happened in the world and showing how the culture that he left in Geneva in was no more outlandish or ridiculous then the culture now, except maybe it was less complicated. His point in writing all this seems to be that Geneva is a good place no matter the age and that Alumni should be proud of the school as he is. He ends by saying that “Yes, 1930 is better than 1889.” He jokes around a lot but in this he is earnest. He thinks that people need not be so worried about Geneva, but love Geneva for having the same end goal as it did in his day. This is what the Alumni seems set out to do, show the improvement, allay fears and show Alumni the bright new day.